What point are you careful about so that you can give this impression of the gap between Sugimoto’s kindness and violence? Also, with which member of the cast do you want to make citatap with?

Kobayashi: The member of the cast with whom I want to make citatap is (Itou) Kentarou-san (Shiraishi’s seiyuu). Indeed, I want to sit around a pot with everyone from Sugimoto’s group. Or, maybe with Tsurumi, who seems to have never done citatap. How would we do that, I wonder (laughs).

The members of Tsurumi faction have never participated in Ainu culture such as making citatap, so it would be great if one day they all get along and can do the Ainu dance together. I wonder if that day will ever come.

Next, concerning the gap, at first I thought I should make it sharper myself, but when acting as Sugimoto, the story pulls me along. Like when he looked at the people around him and realised that Kiroranke was a dangerous guy, he suddenly came to think “Is he working for Tsurumi?”. Or when he joked around with Asirpa-san, he could make funny remarks.

That way, it feels like I can get on it right away. Since the screenplay is like that, I feel like there isn’t much gap that I need to be careful about.

Tell us the story about when you sang the Kamuy Daibakushou-hen in Golden Douga Gekijou #10.

Kobayashi: Oh, my debut single (laughs). There are many things really!

Actually, we recorded the second season immediately following the first season, so the recording for Kamuy Daibakushou-hen was right after we recorded Dried Persimmon. That’s why at the back of the script for episode 17, I scribbled things like “Emphasis here!” for the kak-kak-kamui no part (laughs).

After we finished (the Dried Persimmon part) in a very gloomy mood, Kiroranke’s voice actor Terasoma (Masaki)-san said, “Shall we do it?” We gathered, “Let’s,” and sang it.

However, isn’t the song really close to the original? We were absolutely caught by that and we had to stop the recording several times, “Wrong! Not there!”

Ushiyama’s voice actor NomuKen-san (Nomura Kenji) was somehow in high spirits, we had to tell him “NomuKen-san, tone it down more!”

Even though it took time to harmonise five people, we managed to complete it. What a memorable song it was, wasn’t it. If there’s an opportunity, I’d love to have us five sing it together live. 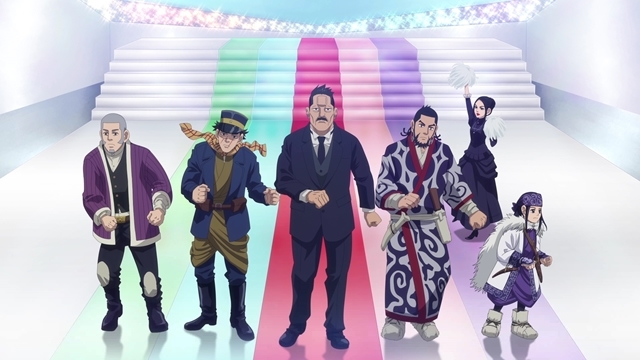 Kobayashi: Is this question okay?! It has nothing to do with the anime! And it might be noisy. Wouldn’t my face look terrible? OK, I’ll keep the mic away a bit. Pretend that it’s the kisarri.

Kobayashi: Oh, the citatap we did the other day? It was. We went to eat wild game, and had the opportunity to do citatap there. It was fun.

It was fun, but citatap should be everyone taking turns doing the chopping, I thought. It was really tiring. If you continuously chop, you’d feel “My shoulders hurt! Next person please!” However, everyone was like “Wee~i♪”. “You cruel people!!”, I thought as I did it.

However, it was fun. That’s why if you have the chance to go and eat wild game together, try doing citatap. You can unite your hearts. Even though I couldn’t get others to cooperate.