In preparation for the making of Golden Kamuy, Noda Satoru and his editor-in-charge Ookuma Hakkou consulted various people and organizations. Among the people they consulted, Satou Yukio, then secretary-general of the Ainu Association of Hokkaido, and Ootani Youichi, an Ainu researcher from Hokkaido Museum, referred them to Chiba University’s Nakagawa Hiroshi. They both thought Nakagawa would be the most suitable supervisor for the upcoming work. Noda and Ookuma thus visited Nakagawa, handing him the draft for chapters 1 & 2. It would not be the first time Nakagawa doing checking for novels and other books, but what he saw in Noda’s draft astonished him so that instead of being asked, he asked to be involved in the making of the series.

Nakagawa has held the position since then, helping not only with the manga but also the anime adaptation of Golden Kamuy. Since he’s a specialist in the Ainu language, he mainly checks the language used in the manga and thinks of the names for the Ainu characters. He also gives culture-related advice and, in some cases, is involved in the setting of the story itself. He performs general checks on Ainu-related matters, both before the manga is published in the magazine, and after, when chapters are going to be compiled into a book and revisions might be needed.

Back in April this year, the Yokohama-born professor was asked by Asahi to recommend books for those who want to learn more about the Ainu. The books, along with additional information that we compiled, will be described below. They are all Japanese books, but probably some have been translated into other languages. (If you know that any of the books is published in your own language, leave a comment below!) We also provide the Japanese title of each book to make searching easier. 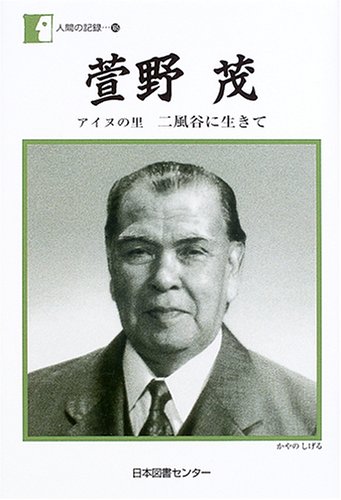 Nakagawa said it’s best to start by listening to the Ainu’s own words, hence the first book he named was Kayano Shigeru’s Ainu Saijiki アイヌ歳時記 (published by Chikuma Gakugei Bunko). Kayano (1926-2006) was one of the last speakers of the Ainu language, a leading figure in the Ainu movement in Japan, and also the first Ainu politician to sit in the Diet of Japan. He’s noted for often posing questions in the Ainu language in the Diet. He still experienced living as an Ainu in Nibutani, the place where he was born, when Ainu culture was still strong there. The book contained his memories of the kind of life the Ainu lived at that time in a way that’s easy to read.

Next it’s Chiri Yukie’s Ainu Shinyoushuu アイヌ神謡集 (Iwanami Bunko), the first book written and published in the Ainu language with beautiful Japanese translation by Chiri herself. Born in Noboribetsu, Chiri (1903-1922) was a Japanese transcriber and translator of yukar (Ainu sagas), who worked with Kindaichi Kyousuke, a linguist chiefly known for his expertise in yukar and Matagi dialect, to preserve Ainu’s oral traditions. Sadly, her life was cut short at the age of 19 because of heart failure, on the same night she completed her first yukar anthology.

Nakagawa himself has written books about the Ainu, and his Ainu bunka de yomitoku Golden Kamuy アイヌ文化で読み解く～ゴールデンカムイ (Shueisha), published on 15 March 2019, has recorded a successful run. In only five months, it’s been printed thrice and sold more than 50,000 copies. Thanks to the success, various books about the Ainu that have been out of print for a long time have been reprinted. One of them is Ainu to kamigami no monogatari ~ Robata de kiita uepeker アイヌと神々の物語~炉端で聞いたウウェペケレ~ (Yamakei Publishers), again by Kayano Shigeru. The book contains 38 Ainu stories with explanation about the Ainu culture related to each story. The revised edition of Nakagawa’s own Ainu no monogatari sekai アイヌの物語世界 (Heibonsha) too was republished after 20 years.

Nakagawa also picked Kotan seibutsuki コタン生物記 (Seidosha) by Sarashina Genzou and Sarashina Kou. Sarashina Genzou was an anarchist and a poet, an expert in Ainu culture and “a vocal critic of the Japanese government’s policy of assimilation of the indigenous Ainu”. According to Nakagawa, Noda often uses references from Kotan seibutsuki—for instance, the famous sea otter scene is based on information from the book.

Nakagawa also recommended Kayano’s Ainu no mingu アイヌの民具 (Suzusawa shoten), an illustrated book detailing how to make and use more than a hundred daily tools of the Ainu. Obviously, this book was also very useful in the making of Golden Kamuy.

For those who need quick answers to Ainu culture, the etnograph Ainu minzokushi アイヌ民族誌 would suffice. While for people who have the same interest as Nakagawa in how languages of the Ainu and the Japanese can be so dissimilar when they’re both used in the Japanese archipelago, he recommended the book by sinologist Hashimoto Mantarou, Gengo ruikei chiriron 言語類型地理論.

For students wanting to study linguistics, Nakagawa thinks Satou Tomomi’s Ainu-go bunpou no kisou アイヌ語文法の基礎 (Daigaku Shorin) would be the most appropriate. Nakagawa himself is supposed to publish a new book on Ainu language grammar from Hakusuisha this year.

Nakagawa’s New Express Ainu-go ニューエクスプレス アイヌ語 (Hakusuisha) comes with a CD that allows us to hear conversations in the Ainu language recorded by an Ainu family of three. He also has Kamui-yukar wo kiite Ainu-go wo manabu カムイユカㇻを聞いてアイヌ語を学ぶ (Hakusuisha) that lets people learn the Ainu language through examples from Ainu oral traditions. The book was co-authored by Ainu folklorist Nakamoto Mutsuko from Chitose.

It’s a list full of interesting books, but in the same interview Nakagawa also presented a sobering fact: he’s planning to retire from Chiba University at the end of this year. Surely there’s an increasing number of people who are learning the Ainu language now, and there are many people working as specialists in research institutions in Hokkaido. But with Nakagawa retiring, there’s a possibility that there will be no Ainu language specialist in Chiba University at least for a while, and there will be no full-time faculty member specializing in Ainu language and Ainu culture in universities in the Tokyo area. This “empty seat” would be the first time in 110 years since Kindaichi Kyousuke became a lecturer in Kokugakuin University in 1908. Nakagawa said that if the state is serious about promoting Ainu language research, they would need to address this issue. (*)